Fuji Electric Frenic AQUA
The water business market including water purification plants and wastewater plants has continued to grow in recent years. Using a large volume of water, cost reduction is required and it largely depends on how efficiently water can be managed. It is of course achieved by reducing the amount of water to be used, however, the reduction in power consumption in water transfer and supply also allows significant cost reduction. And the key to that is the dedicated inverter which controls pumps and motors. The FRENIC-AQUA series, helps energy-saving of pumps, eliminating ineffectual operations by adjusting the amount of water properly to produce a significant effect both on electricity conservation and on cost reduction. 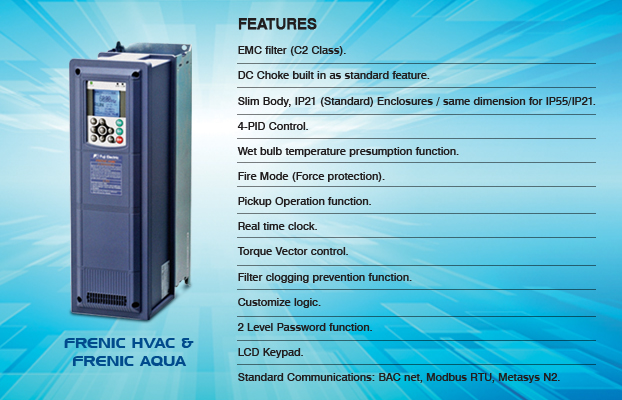 Theun-Hinboun Power Company
The Theun-Hinboun Power Company is owned by three companies: EDL-Gen of Laos with 60%, and GMS International and SN Power, each with a 20% stake. THPC currently employs about 200 people, at the main project compound in Khammouane, in social program offices around the project area, and at the head office in Vientiane. The company is dedicated to developing Lao hydropower resources in the most efficient and sustainable way to help the country expand its development possibilities. We believe well-managed hydropower projects can bring long-term benefits to the people and the environment around the project area, as well as to the national economy.

The original Theun-Hinboun project
The original project harnessed the power of the Nam Theun, using the run-of-the river TH dam at Ban Kengbit. Using a combination of radial gates, flap gate, and a weir, this dam diverted around 110 cubic metres per second of the river's flow down a 6-km tunnel to a ground-level powerhouse at Khounkham, in the Nam Hai valley. The water falls about 235 m and runs through two Francis Unit turbines with a total capacity of 240 MW (following upgrades in 2016-17). From here, an 86-kilometer transmission line to the border at Thakhek exports power to the Electricity Generating Authority of Thailand. From the TH Powerhouse, the water flows through a Tailrace Canal to a Re-regulating pond before joining the Nam Hai river, which runs first to the Hinboun and then the Mekong rivers. 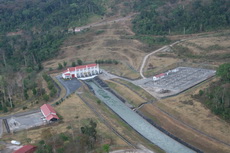 The Theun-Hinboun expansion project
To optimize the potential of the Nam Theun basin to deliver energy during the dry season, when many other Lao power plants run at reduced capacity, THPC began researching alternatives for expanding electricity generation in 2004. After review of various options, a detailed feasibility study was conducted on building a storage reservoir on the Nam Gnouang (NG), a tributary of the Nam Theun, with the aim of providing a greater year-round water supply to the existing power plant at Khounkham. Completed in early 2007, the study was then complemented by an Environmental Impact Assessment, an Environmental Mitigation and Management Plan and a Resettlement Action Plan. Project Construction began in late 2008. The Expansion Project was completed on schedule and within budget. Both new powerhouses were commissioned in late 2012 and the project was inaugurated in January 2013. In 2016-17 the turbines in the original TH Units were replaced with a new and more efficient turbines, bringing the total combined generating capacity of THPC to 520 MW, with much of the water from the new reservoir being used to generate power twice.