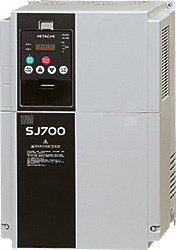 Complex logic sequences are programmed using EzSQ and then downloaded to the SJ700 inverter. External logic using a PLC or relays can be avoided.

Examples of use include automatic speed control based on load, such as the swift-lift function of a crane. Other examples include: Sleep Mode, load distribution and many more.

Data from existing Hitachi SJ300 drives can be copied and downloaded via the remote operator (SRW-OJ) to an SJ700 drive. The terminal blocks of the SJ300 and SJ700 are identical and can be seamlessly transferred. 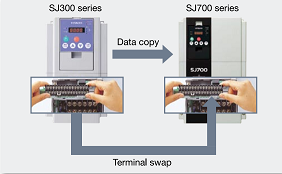 A combination of fast internal processing speed, improved current control and the overcurrent and overvoltage suppression functions leads to the avoidance of inverter trip during acceleration and deceleration.

Improvements to the Sensorless Vector Control allow for the realization of 200% starting torque at 0.3Hz. Auto-tuning makes adjustment of the motor constants easy. Ideally suited for applications where high torque is needed such as cranes, extruders or lifts.

Installation cost and space can both be reduced due to the integration of an EMC filter and braking unit. The integrated filter meets the EN61800-3-2nd Environment standard. The braking unit is integrated in units up to 22kW 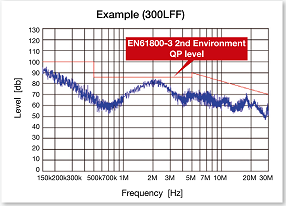