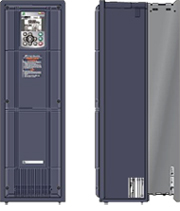 FRENIC-AQUA is the first slim type inverter dedicated for a variety of applications of water supply and wastewater treatment system from Fuji Electric. This new series follows European trends keeping high Japanese reliability. Specific functions to prevent damage on the systems and new energy saving functions are installed as standard, positioning FRENIC-AQUA as a high performance inverter on the pumping application market.

The detachable control terminal block is adopted. This allows the unit to be replaced easily without disconnecting cables.

Fuji frequency inverter Frenic-Aqua series has a capacitor board

Easy replacement just by simply removing and attaching the part. Life prolongation is possible by controlling ON and OFF

Drastically reduces noise. Provided to units of all capacities. Conforming to IEC61800-3.

The first slim body design among the Fuji Electric inverters. The size is the same between IP21 and IP55 (the first in the industry).

The inverter can be installed independently; no control panel is required.

FRENIC-Aqua series is equipped with many functions that control the pumps and blowers used in water treatment facility optimally.

The regulator is indicated by enlarging the LCD. 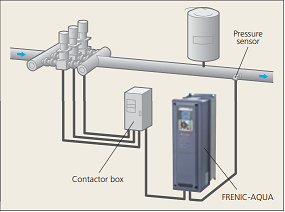 -  Inverter drive motor fixed method (FIXED)
The system is configured by combining the motor driven by the inverter (M0), motors that are commercially driven (M1 to M8) and auxiliary motor (MA). TThe motor driven by the inverter is always fixed as motor M0. Motors commercially driven are added one by one in control when the required discharge flow rate cannot be achieved with the motor M0 only.

The customized logic interface function is provided to the inverter body. This enables forming of logic circuit and arithmetic circuit to the digital and analog input and output signals, allowing simple relay sequence to be built while processing the signals freely.

Frequency can be output forcibly at a fixed rate in preference to PID control. By setting the operation frequency, operation time, and acceleration time at starting, optimal operation for starting the pump can be achieved.
Pressurizing operation can be applied for a certain period of time at the time of start. 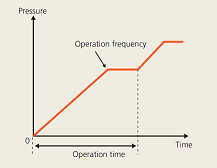 Function codes can be read/write, displayed or hidden by setting the two passwords. This prevents erroneous operation or overwriting of function codes. In addition, if a wrong password was input exceeding the specified number of times, the inverter is restricted from operating as the user is regarded as improper.

Pump dry condition can be detected from PID deviation value by setting the output frequency, output current, and flow rate sensor value. Water leakage and pressure drop due to impeller damage can be detected as well.

The inverter can be stopped when the discharge rate becomes low due to increase of pump discharge pressure. Facility having a bladder tank can make the stoppage period longer by applying pressure immediately before stoppage, which realizes energy-saving operation.

When a pump such as a deep well pump is operated at low speed over a long period of time, the pump may be damaged since the load current is large in the low-speed range. It is possible to provide acceleration/deceleration time specific to the low-speed range in order to avoid prolonged operation.

The motor is rotated in reverse when it is determined that any abnormality, such as being engaged or trapped, is occurred. If sand or dust were caught in the impeller with a submerged pump and overcurrent protection function is activated, the motor is rotated in reverse at restart so that the sand and dust are ejected from the impeller. Then, the motor resumes rotation in forward, allowing water to be supplied in a normal manner.

If a valve is closed quickly after pump stoppage, there is a risk of damaging the check valve (piping, pump, valves, etc.) due to water hammer phenomenon. To protect the check valve from this, the pump speed is gradually slowed down when the check valve closes.