FRENIC-MEGA, which is the successor of former G11S series and named as a “Maximum Engineering for Global Advantage”, is a high performance, multifunctional inverter Fuji Electric has developed by gathering the best of its technologies. With the flexibility and functionality to support a wide range of applications on all types of mechanical equipment, FRENIC-MEGA takes core capability, responsiveness, environmental awareness, and easy maintenance to the next level.

PG vector control
Effective in providing highly accurate control for applications such as printing presses.
- Speed control range: 1:1500
- Speed response: 100Hz
- Speed control accuracy: ±0.01%
- Current response: 500Hz
- Torque accuracy: ±10%
* The option card is required separately.
* The above specifications may vary depending on the environment or conditions for use

Further Improved Fuji's original dynamic torque vector control
In addition to the dynamic torque vector control, the inverter has a constant tuning mode of operation that will compensate for voltage errors in the main circuit devices. The inverter also utilizes a new magnetic flux observer for more precise operation. This allows for a high starting torque of 200%, even at low speed (0.3 Hz).

Improved durability in overload operation
The inverter performs quick acceleration and deceleration tasks, at maximum power, by extending the overload time as compared with previous models. This improves the operation efficiency of the applications such as cutting machines and conveyors. Overload capability: 200% for 3s and 150% for 1 min.
The standard model is available in two specifications concerning the operation load.

When a substantial load fluctuation occurs, the inverter provides a torque response that is best in class. It controls the flux to minimize the fluctuation in motor speed while suppressing the vibration. This function is best suited for the equipment that requires stable speed operation such as a cutting machine. 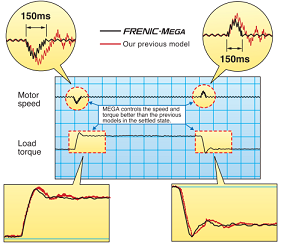 Quicker response to the operation commands

The terminal response to the operation commands has an established reputation. FRENIC-MEGA has further shortened this response time, achieving an industry-best response time. This function is effective in shortening the tact time per cycle and effective for use in the process including frequent repetitions.

- Speed Ratio operation
The Ratio operation function is used to adjust the speed differences between two different sections of a machine/process. Using one main speed reference, two or more inverters can have their speeds modified by an analog ratio signal. On conveyor systems, one conveyor can be made to run slightly faster to match speed with another based on gear box ratio differences. 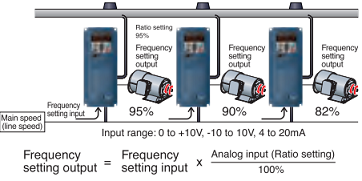 - Optimum function for preventing an object from falling
The reliability of the brake signal was increased for uses such as vertical conveyance. Conventionally, the current value and the frequency have been monitored when the brake signal is output. By adding a torque value to these two values, the brake timing can be adjusted more easily.

- Dancer control function optimized for winding control
The PID value, which is calculated by comparing the target value and the feedback value, is added to or subtracted from the reference line speed. Since the PID calculator proportional gain can be adjusted to have a MEGA FAST response. The inverter can be applied to automatic control systems where quick response may be required. 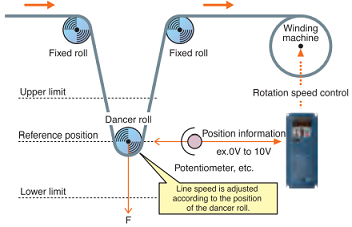 - The built-in USB port allows use of a personal computer loader software for easy information control
- A variety of data from the inverter can be saved in keypad memory, allowing you to check the information at any time
- Data can be transferred from the USB port of the keypad directly to the computer (personal computer loader) at the manufacturing site.
- Periodical collection of life information can be carried out efficiently.
- The real-time tracing function permits the operator to check the equipment for abnormality

The design life for the replaceable components of the inverter is 10 years. 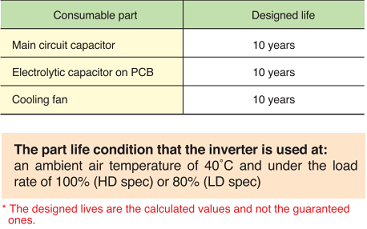 The inverter is loaded with many different functions for facilitating maintenance of the equipment. 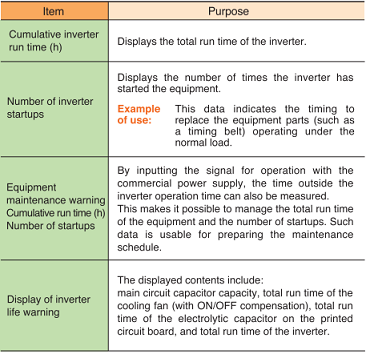